John Reischman and the Jaybirds – and a mandolinists reunion. 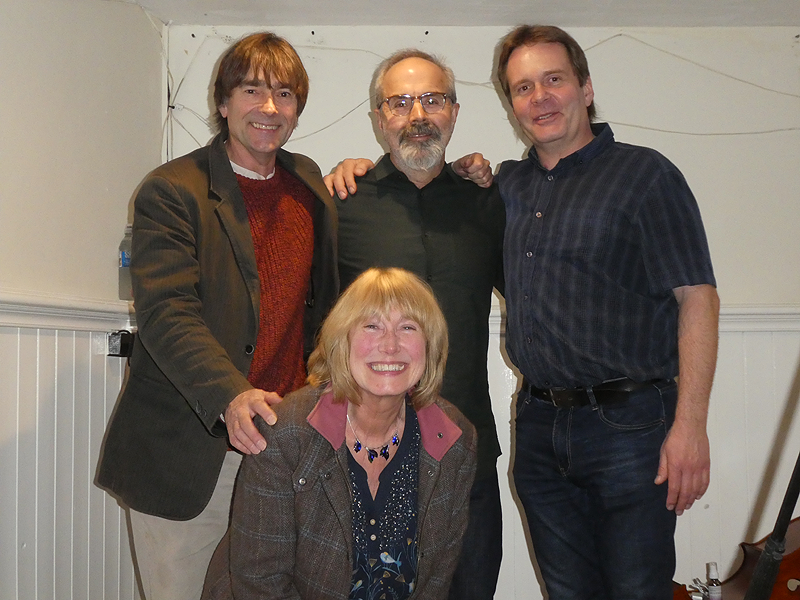 Absolutely wonderful to hear John Reischman and the Jaybirds last night in Fleet – what a great band! Strange coincidence – Radim Zenkl and family came to stay and it was the first time the four of us had been in the same place since Vancouver Folk Festival in 1994. Pictured: Simon Mayor, John Reischman, Radim Zenkl, Hilary James

“Didn’t we have a lovely time, the day we went to Kenwood!” wrote Phil Nixon afterwards. Yes we did! The hotel lived up to our expectations: comfy beds, good food, smiling and helpful staff. Twenty-five of us gathered in the magnificent setting of the Terrace Room and played our hearts out. Here are a few stills; a bigger batch can be downloaded here. 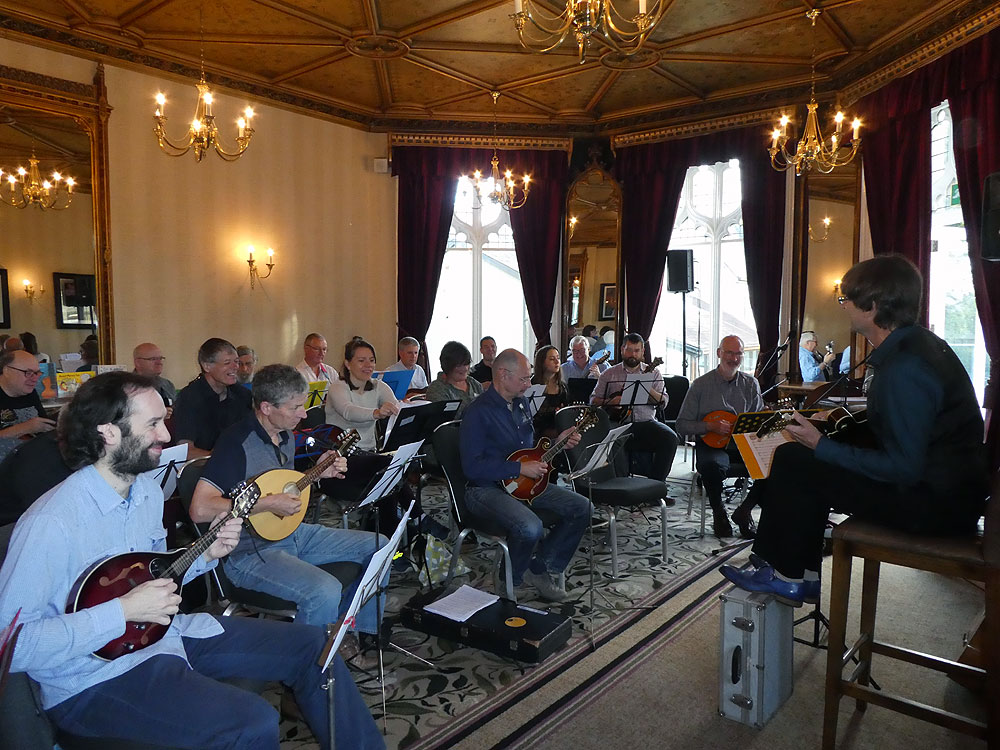 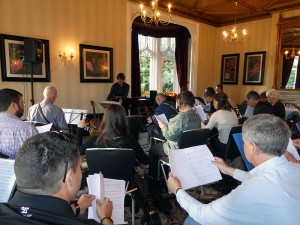 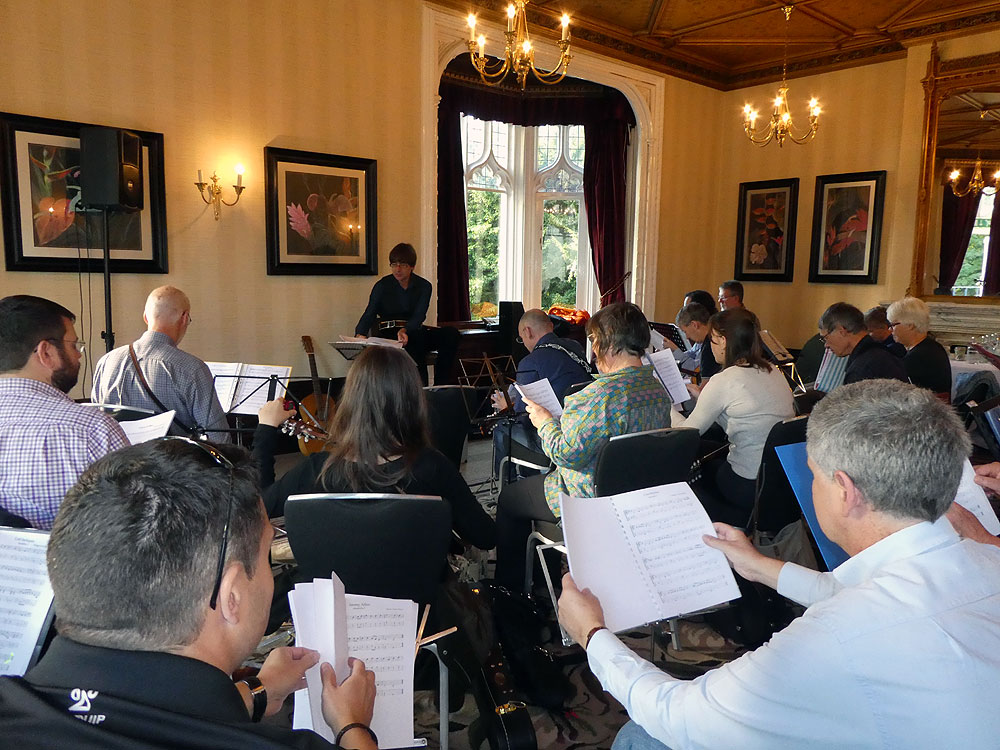 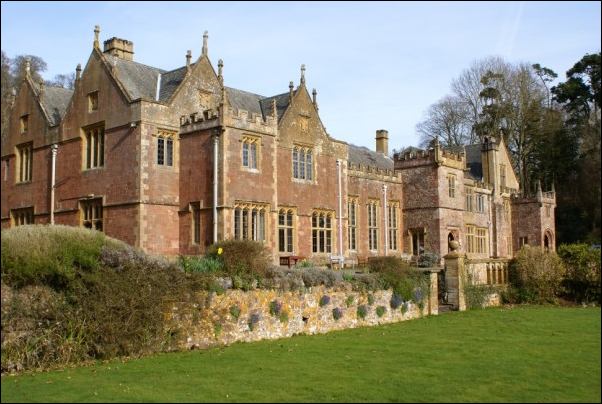 Marooned With A Mandolin

I just dug out these MP3s of three half hour programmes I did for BBC Radio 2 back in 1996. You can listen to the full programmes here – but please bear in mind that much of the information given is now out of date.

Programme synopsis… If mandolin maestro Simon Mayor were marooned on a desert island, there’s no doubt about the one luxury he’d take. In this series of three programmes he goes in search of the origins of the mandolin, looks at what’s happening the world over, and tries to find out why players from Naples to Nashville go wild about it! The series features interviews with many of the world leading players, choice examples from disc, and some amusing anecdotes.

Back at Acoustic Magazine

After a couple of years break, it’s great to be contributing a mandolin column to Acoustic Magazine once again. My first offering is in the current issue (as I write), No 114. It’s an unusually slow version of the beautiful traditional tune Golden Eagle.

Future columns will be in alternate issues – the even numbered ones. The magazine caters mainly for acoustic guitarists, but with nods towards other fretted instruments.

2nd January and just feeling like it’s 2014… Happy New Year to you all!

Fellow mandolinist and historian of the instrument Paul Sparks has sent me this absorbing article on the ladies’ mandolin bands of the Victorian era. Click here to view the PDF complete with some impressive photos.

Paul has also performed much of the music, in particular that of Clara Ross. Here are some video clips of him with John Mackenzie (guitar):

A first “proper” post on a new blog and, given that I’ve just got a new album out, the title “Opening Track” seemed appropriate… so here for all you mandolinists is the opening track on the new album The Art Of Mandolin. The Bolero by Raffaele Calace is a dramatic piece of late Victorian melodrama, or at least it would be if Victoria had been queen of Italy. Here in both standard notation and tablature is a PDF of the opening section – the hook! – and an MP3 to help you on your way.

This was recorded live with Hilary James on guitar and a bit of mandocello added in the studio afterwards.

Bolero is one of those pieces which is a little easier to play than it sounds, probably because it was written by a mandolinist. I love music like that, where everything seems to fall under the fingers so naturally. Must start writing more of the stuff myself!
Simon Mayor